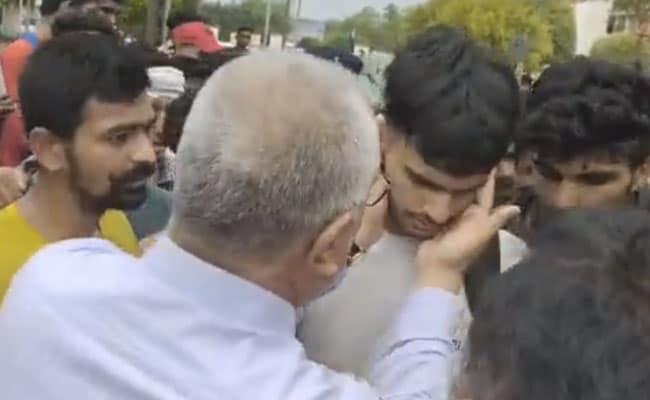 With the introduction of the ‘Agnipath’ recruitment scheme by the Centre, protests continue in different parts of the country. While several regions of the country saw angry mob setting trains on fire and damaging public properties, there were places where the armed forces job aspirants held peaceful protests against the new recruitment scheme which limits the service of new recruits to 4 years.

One such peaceful demonstration was held in Haryana’s Panipat. At the protest, the interaction between the protesters and a government official overseeing the agitation turned emotional.

“What would you do if your children were protesting,” a young protester is heard saying to Duty Magistrate LDM Kamal Girdhar. The official hugs the young man and tries to console him and replies, “You’re like my son.”

The official was seen assuring the protesters that he will present their issues to the government and requested them to not ruin their career. “Son, I’m of your father’s age, your career can get ruined. I will take your issues to the government,” the official is heard saying to the young protester. The official then requests the protesters to not take law in their hands and force the administration to take action against them.

Another protester is also seen expressing his concern about the new scheme in the video. “I’ve been preparing for the Army exams for almost 9 years, now if I serve for only 4 years then I’m not sure whether I will be retained in the 25 per cent category. I have studied till 12th and I am not a graduate. If I leave at the age of 26, then it would take me another 3 years to complete it, how will I get a job at the age of 30.”

The government has announced several concessions to pacify angry protesters who. The home ministry said 10 per cent of the vacancies will be reserved in the Central Armed Police Forces (CAPFs) and the Assam Rifles and a three years age relaxation will be given to ‘Agniveers’ for recruitment in CAPFs and Assam Rifles.

The Shipping Ministry said it will give Employment opportunities in the merchant navy for ‘Agniveers’ from the Indian Navy, six service avenues.

Viral video: See how leopard hunted down a baby monkey