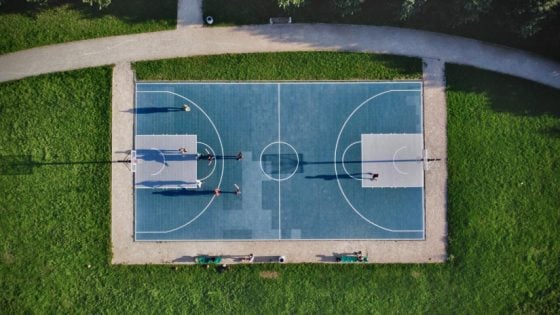 After a recent picture went viral on Reddit, a map denoting the most popular sports in each country around the world, many people were surprised to see basketball top the bill in various countries. Though if you were a regular reader of Sports Mania, you would struggle to believe that soccer wasn’t the dominant sport in every country.

China and the Philippines took some people by surprise, particularly given that the average height in these countries is significantly smaller than that of the US. But, that isn’t stopping anyone from their passion for the game – nor does it mean they don’t know how to throw it down.

What was less surprising, but failed to encapsulate the rich history, was the inclusion of the Baltic countries. All three of Lithuania, Latvia, and Estonia are big fans of basketball – more so than any other sport.

It’s not just a matter of these being dairy-eating countries of extreme heights, but they’re also very good at the game. In 1935, Latvia won the first European championship in Switzerland. Given the light-hearted rivalry between Latvia and Lithuania, the latter decided to recruit some of their talented Lithuanian-American players (i.e. Frank Lubin), issuing them passports in response to Latvia’s win.

Unsurprisingly, two years later Lithuania had won the European championship in 1937, and then won it again in 1939 – the second time being at home in the Kaunas Sports hall. During this decade, Estonia too found themselves a sport they were good at, coming 9th in the 1936 Olympic games – impressive for a country with such a small population – and 5th in the 1937 and 1939 EuroBasket championship.

This success in the 30s kicked off a long love for the game, particularly for Latvia and Lithuania. This is a bit like Uraguay and soccer – the country won the first-ever world cup in 1930 and then won it again in 1950. Since then, they have been totally consumed by the sport, with it being a strong part of their national identity.

Coming off the back of such proud national identity and sporting success, the Baltic countries all fell victim to a long, gruelling generational period of occupation and oppression. In the 1940s, there were mass deportations implemented by the soviets after the fall of Nazi Germany. Despite such devastating occupation, basketball remained at the core of the countries’ leisure, being one part of their identity that lived on through Soviet times.

Unfortunately, such basketball endeavours would have to be played under the Soviet regime, meaning the Baltic countries have a ~50 year period in their history where they had technically not participated in any basketball events of their own; instead, reluctantly representing the Soviet Union on the sporting stage.

After the fall of the Soviet Union and regaining their national independence, the love of basketball began to shine once again but this time in a way they can truly get behind. This is where Lithuania ended up ahead of the three countries when it came to basketball talent.

Lithuania went on to make a big impact on the world stage in 1992 when they got bronze at the Olympics in Barcelona. Coming right after independence and overperforming given their tiny population and lack of resources, the events inspired a film to be created, titled “The Other Dream Team” – which documents the story of the 1992 Olympics for Lithuania in the aftermath of gaining independence.

If that wasn’t enough, Lithuania went on to win bronze at the next two consecutive Olympics, in 1996 and 2000. During this glory period, Lithuania had also come second in the EuroBasket in 1995 and won the championship in 2003. Furthermore, despite the resources and popularity behind basketball increasing throughout Europe, Lithuania managed to get silver in the EuroBasket in 2013 and 2015, too.

Although Latvia did not qualify, Estonia and Lithuania are both qualified to play in the 2022 EuroBasket which is set to go ahead in September – Estonia had scraped by with 2 wins and 4 losses during qualification, whilst Lithuania won 4 and lost 2. Although there may be some friendly local rivalry between the Baltics, they undoubtedly support each other in basketball when it comes to national events. A shared troubled history with a shared passion for the game.

The post Basketball in the Baltics – a rich but difficult history appeared first on TalkBasket.net.