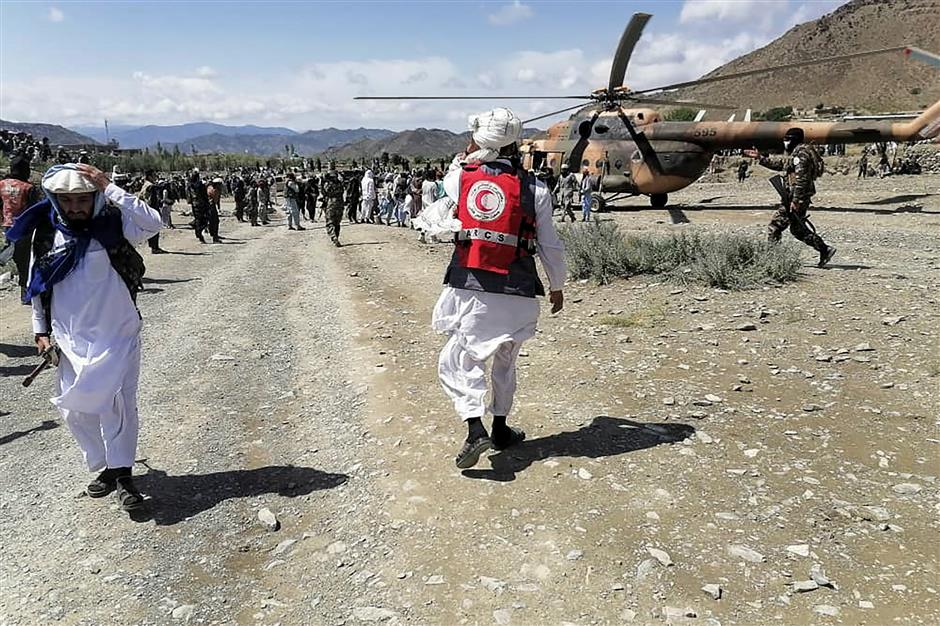 This photograph taken on Wednesday and received as a courtesy of the Afghan government-run Bakhtar News Agency shows soldiers and Afghan Red Crescent Society officials near a helicopter at an earthquake hit area in Afghanistan’s Gayan district, Paktika province.

The death toll from an earthquake that struck eastern Afghanistan early Wednesday has reached 920, while more than 600 people were injured, a disaster official said, adding the number of casualties might rise further.

“The death toll of the quake has reached 920 and at least 620 were wounded,” Deputy to State Ministry for Disaster Management and Humanitarian Affairs Mawlawi Sharafuddin Muslim told reporters.

The official noted that the number of casualties may further rise as the quake destroyed scores of houses in the mountainous region and several people were still trapped under the debris.

Gayan district in Paktika province and Sapari district of neighboring Khost province were the worst-hit areas.

The disaster and humanitarian body has planned to pay 100,000 afghani (US$1,124) to the family of any individual killed and 50,000 afghani to anyone injured in the earthquake, according to Muslim.

The quake, with a magnitude of 5.9, jolted 44 km southwest of Khost, according to the US Geological Survey.

The quake jolted mountainous areas and the Ministry of Defense dispatched seven helicopters with life-saving equipment and medical personnel to the area, while medical and rescue teams were also on the way to the affected areas, the ministry said on Twitter.

More than 300 ambulances reached the affected areas, according to local sources.

The Afghan Red Crescent Society (ARCS) has also dispatched rescue workers, health teams and volunteers to help those affected by the earthquake, the agency wrote on Twitter.

“The ARCS is transferring blankets, tents, kitchen utensils, medicine, water bottles, and food items to the earthquake areas of Khost and Paktika provinces from HQ warehouses of the ARCS in Kabul,” it said.

“WHO sympathizes with families of those who lost their lives and livelihoods from the earthquake that affected some provinces of Afghanistan. WHO Teams are on the ground to support immediate health needs, provide ambulances, medicines and trauma services and conduct needs assessment,” it tweeted.