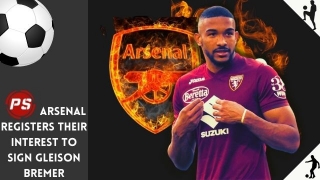 Arsenal conceded 48 goals in the previous Premier League season which is even more than Brighton and Hove Albion, who gave away 4 less than the Gunners. Thus the London club is now looking to strengthen their squad with adding some quality defenders to their backline.

According to reports, Arsenal are the most recent team to express interest in Torino defender Gleison Bremer.

Meanwhile, Arsenal have had a successful summer transfer season thus far, with Manchester City forward Gabriel Jesus rumoured to be close to a move to North London.

Moreover, Porto playmaker Fabio Vieira has also been already transferred to the Emirates Stadium. In addition, Mikel Arteta will have access to William Saliba’s talents next season since the Frenchman has returned after a loan stint at Marseille.

However, players in a variety of positions, including a new addition for the middle of their backline, are still being connected to Arsenal. 90min reports that Torino sports director Davide Vagnati is prepared to speak with a number of London clubs about a potential transfer for Bremer.

Bremer has established himself as one of the most sought-after players outside of the elite clubs in Serie A. The Brazilian helped his club compile a defensive record earlier in 2021-22 that was comparable to the title-chasing teams.

Following his subsequent selection as the division’s top defender for the previous season. The 25-year-old’s value has since increased, and Torino realises that this is the ideal time to maximise it.

Bremer has previously asserted to commit to the 2021-22 season before being permitted to go for a more powerful European club this summer. According to the sources, Vagnati will also hold discussions with Chelsea and Tottenham Hotspur to see whether or not they want to submit a formal application.

After Andreas Christensen and Antonio Rudiger left on free transfers, Chelsea head coach Thomas Tuchel is searching for two new centre backs. In the meantime, Antonio Conte, who has seen Bremer’s abilities first-hand while serving as Inter Milan’s head coach, is trying to finalise a deal for a new defender.

Thus, the trio of these London clubs will be battling for the signatures of Torino star defender Gleison Bremer.

If rumours are to be believed, Spurs have already agreed to recruit Clement Lenglet from Barcelona on a season-long loan deal. This agreement may be officially announced at a later time.

If Bremer decides to stay in Italy to pursue his career, Inter and Juventus have recently been mentioned as prospective destinations.

However, it is alleged that neither club is willing to match his demands, which are supposed to be in the neighbourhood of €50 million (£42.98 million).