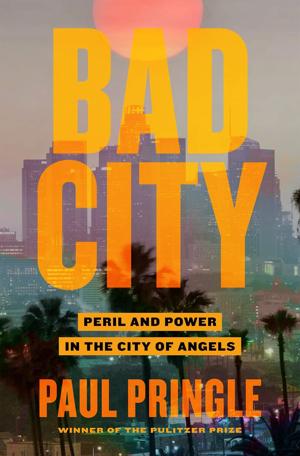 Paul Pringle is a Pulitzer Prize-winning investigative reporter for the Los Angeles Times. His book, “Bad City”, is a cautionary tale of the noxious effect that money and political influence may exert upon our judicial system. It also demonstrates the value of an independent media which adheres to the long-established principles of journalistic integrity.

The book begins in a boutique inn in Pasadena, California, where an overdosed young female is discovered unconscious in a room with her much-older male drug supplier. A whistleblower, disgusted by the sordid scene, contacts Pringle because the man is Dr. Carmen Puliafito, the Harvard-educated dean of USC’s prestigious Keck School of Medicine.

From this point, “Bad City” unfolds like the script from a Hollywood film noir as Pringle doggedly pursues leads which uncover the lurid tale of a brilliant and innovative physician corrupted by wealth and power. The story was even more repellent to the reviewer because the noted physician was a fellow eye surgeon whose degree of moral depravity approached that of yet another ophthalmologist, Syria’s president, Bashar al-Assad.

The sensational story of a modern-day Jekyll and Hyde nearly overshadows the true backbone of the book, Pringle’s painstaking investigation. His trail was hindered at every turn by a respected and feared president of USC and a Pasadena city government and police department dependent upon income from USC. Even the senior editors and publisher of the struggling Times newspaper tried to suppress Pringle’s effort.

By the book’s end, the arrogance of the leadership at USC and the collusion of a small city government reliant upon the institution for financial stability are evident. Pringle’s persistence later uncovers USC’s coverup for the repugnant behavior of an equally creepy gynecologic physician in the university health department which mimicked the more-publicized case of Michigan State’s Dr. Larry Nassar and his decades of sexual abuse of Olympic gymnasts.

Ultimately, the Lori Laughlin-“Varsity Blues” scandal became the rotten cherry atop the rancid sundae of deceit served by the hierarchy at USC. Most of the bad guys lost their jobs and received at least a dollop of punishment for their hubris, but none went to jail. Pringle collected his second Pulitzer for his work.

Readers should open the book realizing that it deals with deeply disturbing and despicable behavior. Nevertheless, any community in a symbiotic relationship with a major university will profit from the lessons contained within.

J. Kemper Campbell, M.D., is a retired Lincoln ophthalmologist who recognizes the value of unbiased and professional journalistic ethics.

Receive the latest in local entertainment news in your inbox weekly!