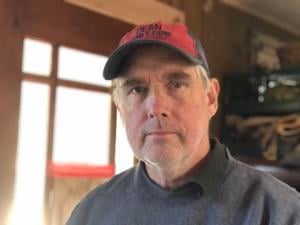 Ms. Alice Hen has hatched out at least four chicks. Right now they are standing next to the feed dish Alice has made her nest in. I think she has two eggs left, and it’s possible they will also hatch out.

I moved her and her eggs into a cage some 20 days or so from the shed, where a lot of hens lay their eggs.

There are predators about, although I haven’t seen any in several days.

After I wrote about Little Fox last week she hasn’t made an appearance. Three weeks ago there were adult foxes around, and some time since then and now Alice’s sister Donna seems to have disappeared. I hope I find her setting, but I know I probably won’t.

I’ll have to go out and change Alice’s arrangements so her chicks don’t get stuck outside the nest. At the same time, I’m not too sure she’ll be happy about that.

She’s a semi-wild thing. She has let me pick her up. Still, I don’t think she likes it.

The hens with some bantam in their heritage are the most likely to set for all the days required to incubate, hatch out eggs and tend to the chicks. I think over these past many years we’ve only had one Barred Rock, a very domesticated chicken, pull off that feat.

While I’m talking about domesticated, the dual sweet corn/feed corn I have in the front garden, Sowell, a heritage, self-pollinating variety, seems to have gone feral.

It’s all different sizes. It’s tasseling at different times. And it seems prehistoric. Some are almost 7-feet tall while others nearby are only 4 foot.

My former neighbor Randy gave me a few jars of the seed three or four years ago. I ran out of that. Mark, who delivers us hay, found some more and had the packets delivered to the house.

Sowell produces large ears of white corn and is good eating. It makes good feed, too. It’s a late-season variety, but I think we’ll cross the finish line before the end of August.

It may be that the corn germinated unevenly because the beginning of our growing season was quite dry.

We’re into the season when the squash plants, both winter and summer types, are taking over the garden. They also seem to have gone feral. They’re starting to cover the more innocent and domesticated vegetables like the cabbage, lettuce and onions.

The summer squash and zucchini are taking over the kitchen. We have several baskets of them.

I’ve been chopping up the larger ones and giving them to the goats. For the first hour of that they weren’t quite sure. Now, they say their favorite food is chopped squash.

If we don’t pick every day, I’d have dozens to sell as baseball bats, or feed to the goats.

Back to the chicks. I just went out and put a promising piece of split wood into Ms. Alice’s condo to act as a ramp. I also put the chicks back into her nest.

Alice gave me a vicious peck for each of the returned babies.

Forrest Hartley lives in Hadley, N.Y. He doesn’t want the growing season to end, even though he knows it will. Leave a message at new_americangothic@yahoo.com.

Get opinion pieces, letters and editorials sent directly to your inbox weekly!