India had objected to the Yuan Wang 5’s scheduled visit to the Chinese-owned port of Hambantota. 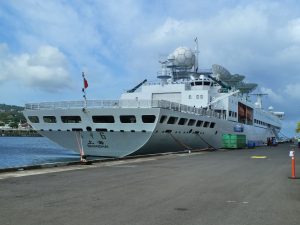 Yuan Wang 6, a Chinese tracking ship in port at Papeete, French Polynesia, December, 2011. The Yuan Wang 6 is a sister ship to the Yuan Wang 5, the vessel originally scheduled to dock in Sri Lanka this week.

Sri Lanka has asked China to defer a port call of a scientific research ship after security concerns were reportedly raised by neighboring India.

The Foreign Ministry said in a statement Monday night that the Chinese vessel Yuan Wang 5 was scheduled to arrive at southern Hambantota port on Thursday and stay until August 17 for replenishment purposes, but “in the light of the need for further consultations” the government asked the Chinese Embassy in Colombo to defer the ship’s arrival.

The ministry did not give any specific reason but India’s security concerns over the presence of the ship close to its southern borders could be a likely reason. Indian media and analysts have pointed out the dual-purpose nature of the Yuan Wang 5, warning that the vessel would be capable of gathering sensitive information about “India’s nuclear power stations at Kalpakkam and Koodankulam as well as six ports in southern India” from a berth in Hambantota.

India’s foreign ministry spokesman Arindam Bagchi said earlier that India was aware of a planned visit by the vessel and that it carefully monitors any development that affects its security and economic interests and will take all measures to safeguard them.

India has long been concerned about the possibility of Chinese military vessels making use of Hambantota port, which was built by a Chinese company and funded by Chinese loans. Those worries spiked in 2020, when Sri Lanka signed over control of the port to China Merchants Port Holdings Company Limited for a term of 99 years to help ease Sri Lanka’s balance of payments crisis.

China has been vying to expand its influence in the Indian Ocean nation, which sits along one of the busiest shipping routes and which India considers part of its strategic backyard.

India has provided crucial assistance to Sri Lanka including food, fuel, medicines, and cooking gas as it struggles with an economic meltdown amid a severe foreign currency crisis. At the same time, China’s agreement to restructure its infrastructure loans to Sri Lanka is vital for the country to be able to reach a bailout program with the International Monetary Fund.

“As Sri Lanka grapples with economic and political difficulties, to grossly interfere in Sri Lanka’s normal exchange and cooperation with other countries is to exploit its vulnerability, which is morally irresponsible and against the basic norms governing international relations,” he said.

“We urge the relevant parties to see China’s marine scientific research activities in a rational light and stop disrupting normal exchange and cooperation between China and Sri Lanka,” he said.

China backed Sri Lanka during a civil war with ethnic Tamils rebels and defended it from accusations of gross human rights abuses. Since the end of war in 2009, China has lent Sri Lanka billions of dollars for development projects, some of which have been criticized for having little practical use. They include Hambantota port, which Sri Lanka leased to China in 2017 because it could not pay back the loan.