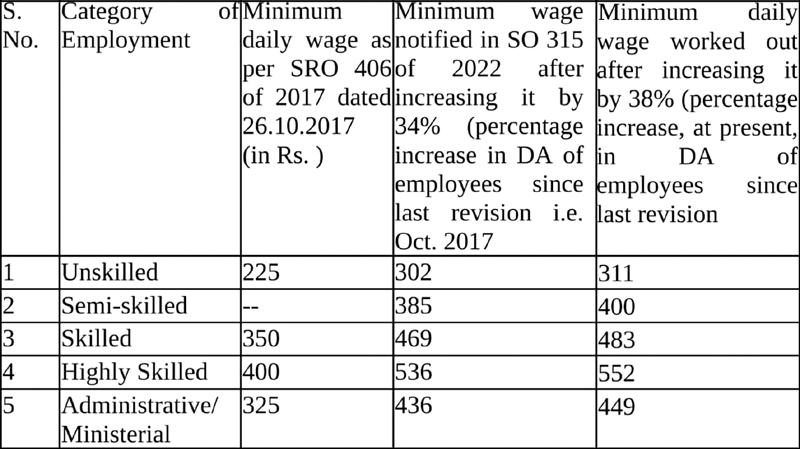 Major relief for daily wagers on cards
Sanjeev Pargal
JAMMU, Sept 22: An Advisory Board set up by the Jammu and Kashmir Government for revision of minimum wages under the Minimum Wages Act, which covers the issue of nearly one lakh daily wagers some of whom are on strike for past several days, has reportedly recommended 38 percent Dearness Allowance (DA) which has become applicable for the Government employees since last wage revision in October 2017.
The Board has submitted its report to the Government which is likely to take decision on recommendations anytime now.
“The Advisory Board recommends that the proposal for minimum rates of wages notified vide SO 315 of 2022 issued on June 27, 2022 may be finalized by taking into account the corresponding Dearness Allowance rate as on date which is 38 percent,” the Advisory Board recommendations, said.
However, there was a difference of opinion among the Board members about the issue of notification of Variable DA based on the Consumer Price Index as a component of the minimum wages after every six months.
“About the issue of notification of variable DA based on Consumer Price Index as a component of the minimum wage, every six months was discussed from all perspectives. There was a difference of opinion among the members. While the Advisory Board did find the concept of notification of variable DA desirable, in principle, as it will have the effect of giving a sense of real time increase in wages to the workers, it was also observed that there may be issues in implementation of mechanism on ground,” the Board observed.
It, therefore, recommended that the Labour and Employment Department may examine the matter separately in consultation with the Finance Department.
The Board said it considered written objections and suggestions expressed by the members during the meeting and was of the opinion that revised rates notified by the Government provide a sufficiently comparable increase in the minimum wages.
“A minimum wage is only the minimum amount of remuneration that an employer is required to pay to the wage earners for the work performed during a given period and the objective is to prevent exploitation. The revision is not any detailed economic exercise and it excludes any other provision or allowances that the employer may extend to the worker,” the Board observed.
Therefore, it said, it is not a limiting rate but is guided by other market dynamics such as labour availability and economic activity of a region.
It observed that there are specific provisions in the Act regarding payment of wages on weekly off days and on holidays and therefore the per day minimum wage rate as notified by the Government is appropriate.
The Advisory Board considered the written and oral suggestions on the inclusion of new employments in the schedule of the minimum wages under Section 27 of the Act and advised that the Labour & Employment Department may consider on file, all the suggestions made in this regard and add such employments as are necessary to the schedule for notification under the Minimum Wages Act following the procedure.
The Advisory Board was headed by RR Bhatnagar, Advisor to the Lieutenant Governor and comprised Vivek Bhardwaj, Additional Chief Secretary (Finance), Shailendra Kumar, Principal Secretary Works, Sarita Chauhan, Commissioner Secretary, Labour & Employment, Abdul Rashid War, Labour Commissioner, MY Itoo, DG Budget, Ali Mohammad, DGM J&K Industries, Obaid Riyaz, DGM J&K Industries and representatives of Industrial Association and trade union leaders.
The Advisory Board considered all suggestions received by it before making recommendations.
The issue of daily wagers has become major concern for the Government as those posted in the PHE Department or on strike for last several days demanding their regularization etc.
There were reports that the Government could increase minimum wages of the daily wagers initially followed by some more steps for their welfare later.