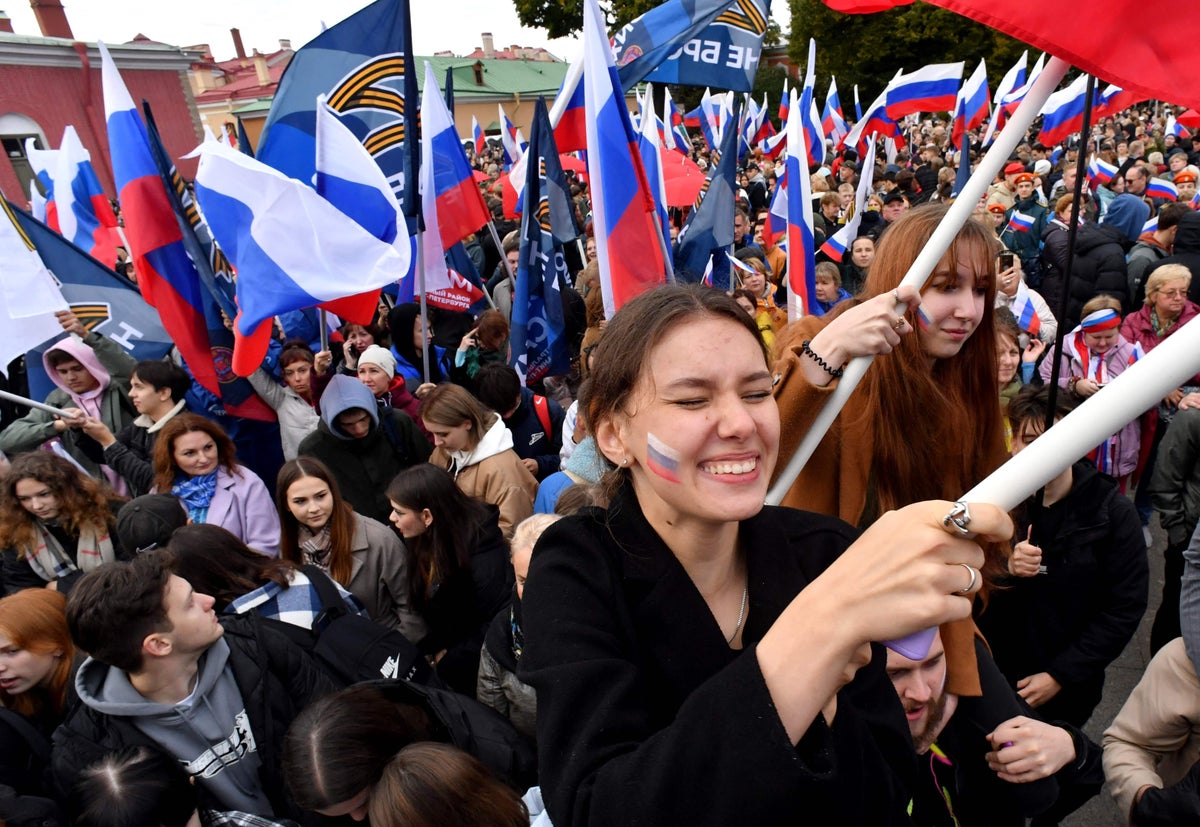 Voting began Friday in hastily-organised and highly-disputed referendums in four occupied regions of Ukraine to become part of Russia.

State media in Moscow said voting got underway – in the “liberated territories” of Luhansk, Kherson and the partly Russian-controlled Zaporizhzhia and Donetsk regions – at 8am local time.

The results are expected to be announced on Tuesday and are likely to dramatically escalate the seven-month war.

Moscow has continually warned this week it will regard the regions, if they vote to join, as part of Russia and any attacks on them will be considered the same as an assault on any other part of the country. The Russian president Vladimir Putin and other leaders have even raised the prospect of using nuclear weapons to defend the regions, warning “this is not a bluff”.

They are taking place just days after Putin ordered the partial mobiliation of Russians for the war effort, which could add about 300,000 Russian troops to the fight. Thousands more Russians fled the country on Friday in case they were called-up, but huge rallies took place in Russian cities in support of the annexed regions.

Voting began as the UN’s human rights body said it had found evidence war crimes had been committed in Russian-occupied arras of Ukraine.

The referendums have been widely denounced by Ukraine and the West as shams without any legal force. Western leaders have said they will not recognise the results.

Russia, which has lost ground in the war in recent weeks, does not fully control any of the four regions and much of the population has fled because of the conflict.

One Ukrainian official on Friday called on residents not to go to the polls, claiming “participation in a pseudo-referendum is the worst betrayal”.

Ivan Fedorov, the deposed Ukrainian mayor of Melitopol, part of Zaporizhzhia province, also said on Telegram that a loud explosion was heard by residents in the city centre an hour before voting started.

“People are afraid to leave their homes,” Fedorov said.

Serhiy Gaidai, Ukraine’s Luhansk region governor, said that in the Russian-held town of Bilovodsk, a company director told employees the voting was compulsory and anyone refusing to take part would be fired and their names given to security services.

He said that in the town of Starobilsk, Russian authorities banned the population from leaving the city until Tuesday and armed groups had been sent to search homes and coerce people to get out to take part in the referendum.

“The mood of the Russians is panicky because they were not ready to carry out so quickly this so-called referendum, there is no support, there’s not enough people,” Yuriy Sobolevsky, the displaced Ukrainian first deputy chairman of the Kherson regional council, said on messaging app Telegram.

The votes appear certain to go Moscow’s way but British foreign secretary James Cleverley told the United Nations on Thursday that Putin aimed to “fabricate the outcome of these referendums”.

The referendums have also been denounced as an illegal farce by US President Joe Biden, French President Emmanuel Macron, and UN Secretary-General Antonio Guterres.

The Organisation for Security and Cooperation in Europe, which monitors elections, said the outcomes would have no legal bearing as they do not conform with Ukraine law or international standards and the areas are not secure.

During the vote, election officials will bring ballots to people’s homes and set-up makeshift polling stations near residential buildings, according to Russian-installed officials in the occupied regions, who cited safety reasons.

Tuesday will be the only day when the voters will be invited to visit regular polls.

Polls also opened in Russia, where refugees from the occupied regions can cast their votes. Denis Pushilin, separatist leader of Moscow-backed authorities in the Donetsk region, called the referendum on Friday “a historical milestone.”

Vyacheslav Volodin, speaker of Russia’s lower house of parliament, the State Duma, addressed the occupied regions Friday in an online statement, saying: “If you decide to become part of the Russian Federation — we will support you.”

Valentina Matviyenko, chair of Russia’s upper parliament house, said that residents of the occupied regions were voting for “life or death” at the referendums.

As the votes was getting underway in the occupied regions, Russian social media sites were full of dramatic scenes of tearful families bidding farewell to men departing from military mobilisation centers.

In cities across the vast country, men hugged their weeping family members before departing as part of the draft. Russian anti-war activists, in the meantime, planned more protests against the mobilisation.

Ukraine says Russia intends to frame the referendum results as a sign of popular support, and then use them as a pretext for annexation, similar to its takeover of Ukraine’s Crimea in 2014, which the international community has not recognised.

Ukrainian president Volodymyr Zelenskyy only briefly mentioned the “sham referenda” in his nightly address in which he switched from speaking in Ukrainian to Russian to directly tell Russian citizens they were being “thrown to their deaths.”

“You are already accomplices in all these crimes, murders and torture of Ukrainians,” he said.

“Because you were silent. Because you are silent. And now it’s time for you to choose. For men in Russia, this is a choice to die or live, to become a cripple or to preserve health. For women in Russia, the choice is to lose their husbands, sons, grandchildren forever, or still try to protect them from death, from war, from one person.”

The referedums take place against a background of incessant violence, as Ukraine‘s presidential office said at least 10 civilians were killed and 39 others were wounded by Russian shelling in nine Ukrainian regions over the last 24 hours on Friday.

It added that fighting has continued in the Russia-held southern Kherson despite the voting, while Ukrainian forces troops meted out 280 attacks on Russian command posts, munitions depots and weapons in the region.

Why the West fears Bolsonaro