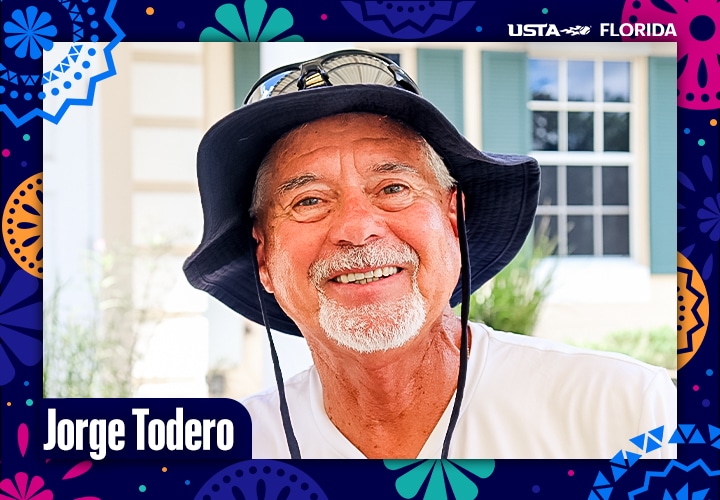 In celebration of Hispanic Heritage Month, which takes place Sept. 15 – Oct. 15, USTA Florida is recognizing members of Florida’s rich Hispanic community whose talents and dedication help to grow the great game of tennis every day — at every level. We applaud them all for making tennis a better and more inclusive sport, and for making the face of our game more accurately reflect the dynamic diversity of our country.

Jorge Todero currently is a Hispanic professional tennis coach on tour, who is training countless players to perform at the highest levels. His highest ranked player he currently coaches is 2022 US Open Doubles Semifinalist, Caroline Dolehide.

Born and raised in Argentina, Jorge Todero first picked up a tennis racket when he was just ten years old. However, he also was passionate about soccer, as that was the country’s biggest sport.

When he got older, he had to decide on which sport he wanted to play, but ultimately his friend convinced him to dive into tennis. After touring for a bit and traveling across the world, he decided it was time to get into coaching.

Fast forward over 40 years and he has coached some of the tennis greats in Argentina, Colombia, and the United States. These players include Alberto Manchini and Martin Jaite, who both achieved a top 10 ranking in the world. He also coached Fabiola Zuluaga, Meghaan Shaughnessy, and Varvara Lepchenko, who all achieved a top 20 ranking in their careers.

He retired from coaching in 2019, but he still works with current WTA player, Caroline Dolehide. The one thing that brought him back to the sport was passion. “You have to do everything in life with passion,” Todero said. “If you aren’t passionate about what you do then you won’t give the most effort.”

Being in his seventies, Todero said he doesn’t need the money anymore, he doesn’t need to be sweating out in the sun for multiple hours a day, but he does it because he has a passion to see people improve and achieve their goals.

“I still help Caroline because she is a great player and I want to make sure she is able to accomplish her goals in her career.”

This is one of Todero’s favorite things about being a tennis coach, being able to impact the future of the sport. “There are many people in the youth community that want to learn the sport,” Todero said. And while it can be intimidating to pick up a tennis ball and racket, he wants to make sure he’s there to make them comfortable with the fundamentals.

Another reason Todero likes to coach in Florida is because, “there are a lot of kids that only speak Spanish.” Communication is a key element when it comes to learning and improving, so he finds a special connection in their shared language.

When Todero first moved to Florida, he said it wasn’t scary, but eye-opening to move away from Argentina, because he found there to be such great opportunities for him.

He believes it is important to recognize Hispanic Heritage Month in tennis because there are so many greats of the sport that come from a Hispanic descent.

Todero has traveled the world thanks to tennis and has interacted with many cultures throughout his life. He believes all cultures are special and should be appreciated by the community.