The top diplomats of Japan, the United States and South Korea on Thursday said they oppose any attempts to change the status quo of territories by force amid China’s growing assertiveness in the Asia-Pacific region, while showing their resolve to resolutely respond to any nuclear test by North Korea.

The meeting of Japanese Foreign Minister Yoshimasa Hayashi, U.S. Secretary of State Antony Blinken and South Korean Foreign Minister Park Jin was held in New York on the margins of the U.N. General Assembly’s annual session. It came amid concerns that North Korea may carry out its first nuclear test in years.

Condemning North Korea’s numerous ballistic missile launches earlier this year, the three reaffirmed that if the country conducts what would be its seventh nuclear test, it would be met with “a strong and resolute response from the international community.” 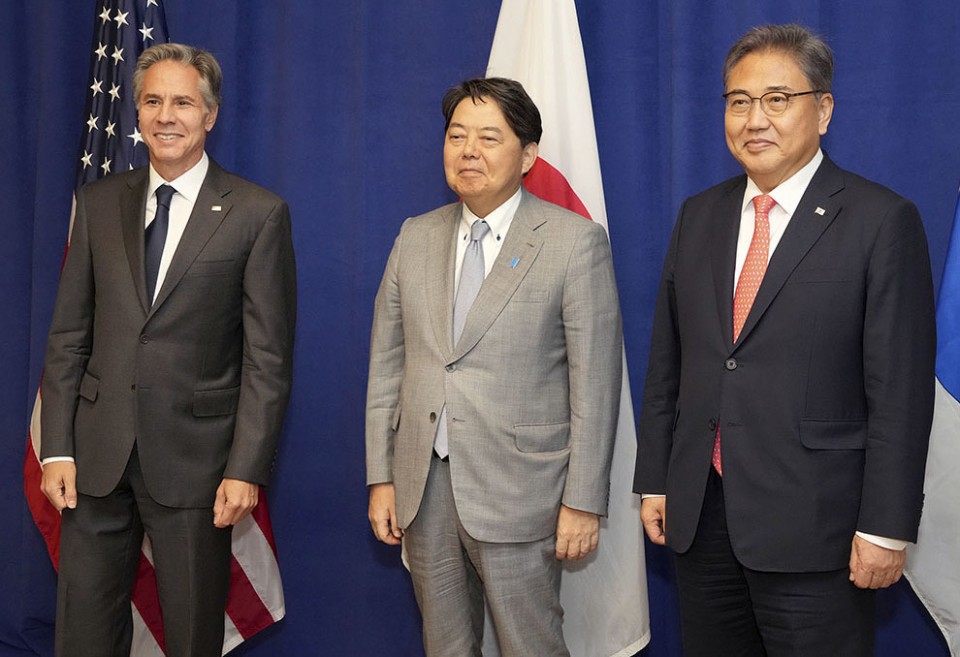 They also expressed their “serious concern” over what they view as North Korea’s “escalatory and destabilizing” messaging related to nuclear weapons use, according to a joint statement issued after the meeting, citing the recent adoption of a new law by Pyongyang authorizing the launch of pre-emptive nuclear strikes.

The meeting also underscored the broadening of the countries’ trilateral cooperation beyond North Korea, with Blinken saying at the outset of the talks that the three-way ties are important to the United States for effectively addressing both regional security issues and global challenges.

The three affirmed their shared commitment to supporting the needs of Pacific island nations, an area in which China is expanding its influence.

They also condemned Russia’s aggression against Ukraine and stressed that they will “oppose any attempts to change the status quo of territories and areas by force or coercion anywhere in the world.”

The affirmation came amid fears that Taiwan could become the “next Ukraine,” with China increasing its military and diplomatic pressure on the self-ruled democratic island.

China and Taiwan have been governed separately since they split in 1949 due to a civil war. China views Taiwan as a renegade province awaiting reunification, by force if necessary.

Tensions between the United States and China have heightened over Taiwan following U.S. House of Representatives Speaker Nancy Pelosi’s visit to the island in early August, with Beijing carrying out large-scale military drills in the vicinity.

North Korea’s Kim vows to never give up nukes amid U.S. threat