The top diplomats from the three countries met in New York on Thursday to coordinate the joint response over North Korea’s nuclear and missile threats. 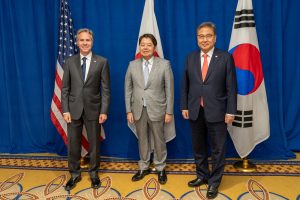 “The Secretary and Foreign Ministers underscored the importance of working together to address the DPRK’s destabilizing behavior and advance our shared goal of achieving the complete denuclearization of the Korean Peninsula,” the joint statement said. DPRK is an acronym of North Korea’s official name: Democratic People’s Republic of Korea.

Since South Korean President Yoon Suk-yeol took office in May, Seoul has sought to strengthen its military alliance with Washington in a bid to effectively deter Pyongyang’s provocations. To that end, the U.S. and South Korea conducted reinvigorated joint military drills last month, which had been scaled down since 2018, a decision made by then-South Korean President Moon Jae-in and U.S. President Donald Trump.

Condemning the spate of North Korea’s ballistic missile testing this year, the top diplomats “reaffirmed that a DPRK nuclear test would be met with a strong and resolute response from the international community.” Based on satellite analysis, Pyongyang has been conducting months-long restoration activities in its Yongbyon nuclear complex, believed to be in preparation to conduct a seventh nuclear test.

Park, Blinken, and Hayashi “also expressed their serious concern over the DPRK’s escalatory and destabilizing messaging related to nuclear weapons use, including its adoption of a new law on nuclear policy,” the joint statement said.

Two weeks ago, North Korea officially codified a law to authorize use of its nuclear weapons under certain conditions. Alongside granting himself the flexibility to use nuclear weapons as a preemptive measure, North Korean leader Kim Jong Un publicly said that his country’s status as a nuclear weapons state has become “irreversible” under the new law.

China and Russia previously blocked the imposition of new sanctions at the U.N. Security Council when the North resumed intercontinental ballistic missile (ICBM) testing in March. In the wake of the Ukraine crisis and the China-U.S. tensions over Taiwan, China and Russia, both allies of North Korea, could continue to veto any additional sanctions on North Korea again – even though they did not block new sanctions when North Korea conducted its sixth nuclear test in 2017.

In this context, the United States has assured its allies in the region that it will use every military asset, including its nuclear arsenal, to protect them in case of attack. Blinken also “reaffirmed the U.S. steadfast commitments” to the defense of South Korea and Japan during the meeting on Thursday.

Blinken and Hayashi both expressed support for Yoon’s “audacious initiative,” the South Korean administration’s offer to entice North Korea to give up nuclear weapons in exchange for economic gains. However, Pyongyang has already harshly dismissed that initiative and shut the door on any dialogue with the Yoon administration during its five-year term.

On Friday, the nuclear-powered aircraft carrier USS Ronald Reagan arrived in the port of Busan, the second largest city in South Korea, for a joint military exercise with the South Korean navy. For the first time since 2017, the U.S. and South Korea are involving a U.S. aircraft carrier in the drills, sending a relatively strong message to Pyongyang.

With China gearing up to hold its most important political event – the 20th National Congress of the Chinese Communist Party – in mid-October, Beijing will not want any surprises on the Korean Peninsula. North Korea is expected to hold off on any significant provocations against South Korea and the United States for the next month. However, Kim Jong Un may resume testing his ballistic missiles to respond to the drills.

WhatsApp Users Can Board Hyderabad Metro via In-App Option: How To Buy Tickets?

Avneet Kaur wore a very transparent sari for the photoshoot, people were stunned by the looks