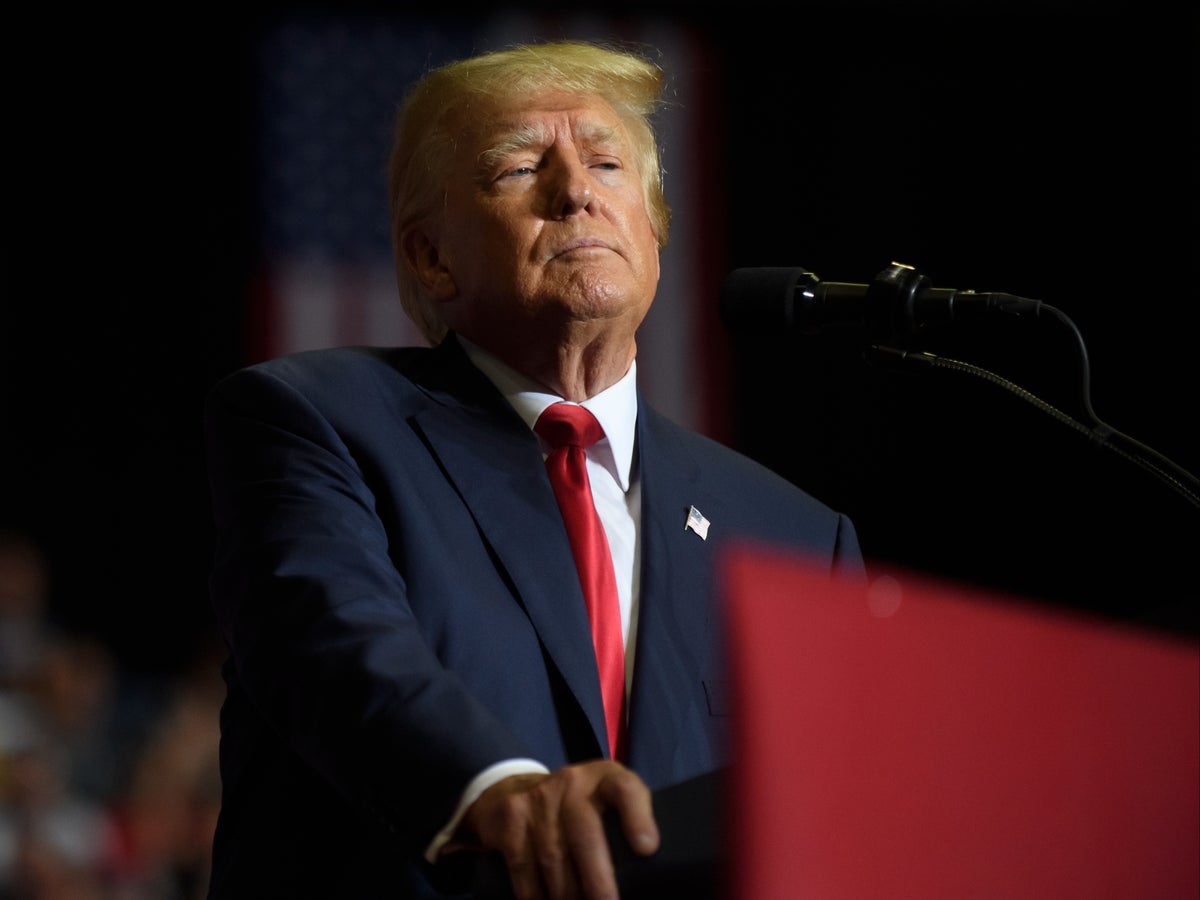 Donald Trump has claimed that as president he had the authority to declassify top secret documents just “by thinking about it”, as he blamed banks themselves for failing to check his company’s valuations.

He was speaking on Fox News after New York’s attorney general accused the Trump Organisation of inflating his net worth by billions of dollars and habitually misleading banks.

Dubbing it “the art of the steal”, Letitia James in her suit has also named his children Donald Trump Jr, Eric Trump, and Ivanka Trump as defendants.

The 222-page suit detailed instances of alleged fraud, many involving claims made on annual financial statements that Mr Trump would give to banks, business associates and financial magazines as proof of his riches as he sought loans and deals.

Also under probe for removing government-owned documents from the White House and taking them to his Florida estate, Mr Trump told Sean Hannity that “there doesn’t have to be a process” for declassifying documents “if you’re the president of the United States”.

Mike Lindell’s efforts to aid Donald Trump and the campaign to overturn the 2020 election may have finally gotten him into trouble.

NBC News reported on Wednesday that the hybrid pillow vendor and political operative is under federal investigation for a number of serious crimes related to his efforts to prove that widespread voter fraud or other election-related shenanigans cost Donald Trump the election in 2020.

The Brooklyn federal judge in charge of reviewing the 11,000 documents which the FBI seized from former president Donald Trump’s home during an 8 August search has ordered the ex-president’s legal team to declare one way or the other whether they believe agents planted evidence to incriminate the former president.

The baseless accusations have floated for weeks, shared by the president himself and his closest allies. They’ve sparked conspiracies among his fans of a FBI-led political campaign to destroy Mr Trump, and led to an increase in violent threats targeting the agency.

In an order released on Thursday, the special master called for by Mr Trump’s team gave those attorneys until 30 September to say whether any of the items on the 11-page inventory provided by the department are described incorrectly.

Donald Trump will host a fundraiser next month for Dan Cox, the Republican nominee for governor in Maryland, at his Mar-a-Lago estate.

Mr Cox has bought in to the former president’s falsehoods about the 2020 election and was not endorsed for the nomination (or, so far, for the office at all) by Maryland’s incumbent retiring GOP governor, Larry Hogan. His victory in the GOP primary was one instance in which Democrats successfully boosted, through tactical campaign spending, an election denier against a more moderate opponent in a Republican-on-Republican matchup.

Read more at The Hill from Julia Manchester.

Donald Trump tossing paper towels into a crowd of Puerto Rico residents in October 2017 resurfaced on social media overnight Wednesday as President Joe Biden pledged full support for the island, which was once again struck by a natural disaster.

Twitter users were quick to contrast the Democratic president’s response with the resistance to aiding the island that some conservatives showed during the Trump administration as well at the ex-president’s own tone deaf photo op during which he threw rolls of paper towels at waiting residents.

‘We’re surging federal resources to Puerto Rico and we’ll do everything — everything we can to meet the urgent needs you have,’ Biden says

A Capitol rioter who dressed up as Adolf Hitler and whose case has been championed by former President Donald Trump has been sentenced to four years in federal prison for participating in the attack.

Timothy Hale-Cusanelli, 32, was convicted in May after trying — and failing — to convince a jury he was unaware that Congress was in session at the Capitol.

Naval investigators spoke to 34 of his former co-workers during a probe. They told investigators he held “extremist or radical views pertaining to Jewish people, minorities, and women,” with some saying they were “afraid” of him.

Read more about this rioter, whose cause has been personally supported by Donald Trump, in The Independent:

Hale-Cusanelli admitted that he someties says “ugly” and “repugnant” things

Maryland Representative Jamie Raskin on Wednesday smacked down one of his Republican colleagues after he was asked to respond to a repeatedly debunked conspiracy theory regarding an alleged agent provocateur who has become a central figure in Trumpworld claims about the January 6 riot.

Rep Thomas Massie, a darling of the far right, was pressing Mr Raskin on a long-debunked tale about Ray Epps, a man whom Trump supporters have latched onto as a supposed government agent who they claim provoked others to violence during the attack. The conspiracy has allowed many on the far right, including Mr Massie, to shift blame from their own actions leading up to the riot.

“He’s just trying to survive and he’s on your side. You don’t have many voters left — you might want to try to hang on to them without demonising and vilifying your own people,” Mr Raskin told his Republican rival.

A Trump-backed Republican campaigning for an Ohio congressional seat has some explaining to do after it was revealed he has misrepresented his time in the military.

JR Majewski, who is running for Ohio’s 9th Congressional District seat, was at Donald Trump’s rally on Saturday in Youngstown, Ohio, where he received a shout-out from the ex-president himself. But now he’s taking new criticism after it was revealed that he released a statement claiming to have a desire to go “back” to Afghanistan and serve personally — despite having never been deployed to the country. He’s also never been in combat.

Read more in The Independent from Graig Graziosi:

Mr Majewski was actually stationed in Japan and later Qatar

Donald Trump’s real estate empire engaged in an “astounding” level of fraud and deceptive business practises over more than a decade, during which the former president and his associates “grossly and fraudulently” inflated the value of his properties to obtain tax, loan and insurance incentives while boosting his financial ambitions, according to New York Attorney General Letitia James in a lawsuit filed on Wednesday.

The Independent’s Alex Woodward combed through the 222-page document. These are the properties and assets that the office of the attorney general alleges were central to a fraudulent scheme orchestrated by Mr Trump and his business allies.

Meta executive Nick Clegg says he will make the final call on whether to reinstate Donald Trump’s Facebook account when his suspension from the social media platform runs out next year.

Mr Clegg, the company’s head of Global Affairs, told an event in Washington DC that allowing the one-term president to potentially return to Facebook is “a decision I oversee and I drive.”

Meta executive Nick Clegg says he will make the final call on whether to reinstate Donald Trump’s Facebook account when his suspension from the social media platform runs out next year.

Former president Donald Trump has said that the National Archives and Records Administration (Nara) is run by a “radical left group”.

“You know, Nara is a radical left group of people running that thing and when you send documents over there, I would say there’s a very good chance a lot of those documents will never be seen again,” he added.

However, he did not elaborate on what he meant by the statement.