2015 was the year of hope for the revival of manufacturing when the government of India came up with initiatives such as Make in India, symbolising a ferocious tiger, Startup India, Stand-up India, Digital India and Skill India. 2020 was another landmark year with the announcement of Atma Nirbhar Bharat to remain resilient at the start of the pandemic. These were followed up by PM Gati Shakti, Production Linked Incentive Schemes (PLI), several initiatives targeting the growth of MSMEs and other district-focused programmes as accelerated efforts.

Yet, disappointments did not distance and the Finance Minister recently had to kindle the strength of India Inc by invoking Lord Hanuman – whose strength had to be reminded both to cross the seas to reach the kingdom of Ravana and fetch Sanjivani (the life-giving herb) to bring Laxman back to life – for the revival of manufacturing growth.

Despite crowding in the private sector into a friendly investment regime, enactment of Labour Code, Insolvency and Bankruptcy Code, and India becoming the fifth largest economy in the world, manufacturing not reaching even the 12th Five Year plan goal of 25% of the GDP is baffling. Almost a decade closing in, and we are still searching for the right solutions. What’s worse, notwithstanding the rosy-looking GDP, India has widespread unemployment. At the average level, incomes haven’t grown fast enough to sustain a consumption drive.

During the last four decades (1980-2020), the average profit of industries grew nearly 50 times, number of factories too doubled during the last decade compared with the rest of the decades. And yet, manufacturing reaching its potential fifth position in the world as predicted by BCG in 2013 remains distant

The RBI data on Investment as ratio of GDP indicates that the best happened in the initial euphoria of change, that is, 2014-15 when it was 30% and thereafter, ‘not all the perfumes could sweeten the little hand’ and till 2020 it remained at least 2% below that level.

Contrastingly, the UPA regime saw the best investment at 30.7% – incidentally in its very first year. During the decade of UPA rule, investments in the economy grew 4.4%. The NDA regime during the last eight years could not see a consistent rise in the investment-GDP ratio beyond 29%, despite some occasional positive trends, thanks to ‘Make in India’ triggering on average two lakh factories per annum in the last decade.

The RBI data on Investment as ratio of GDP indicates that the best happened in the initial euphoria of change, that is, 2014-15 when it was 30% and thereafter, ‘not all the perfumes could sweeten the little hand’

The manufacturing ecosystem is different from the business ecosystem and both should complement each other. The manufacturing ecosystem consists of the interaction between the factors of production and the facilitation that the governments choose to provide in the midst of competing demands from all the other sectors of the economy. We have shown leadership success in apparel and accessories, auto components, textiles, drugs and pharmaceuticals, petroleum products and motor vehicles. Sustainable growth of these sectors across the country did not happen.

In a Forbes India article, India’s growth story has been blunted notwithstanding the red carpet rolled out to foreign companies. Several major multinational companies —Cairn Energy, Hutchison, DoCoMo, Lafarge, Carrefour, Daiichi Sankyo, Henkel — have exited the country citing an unfriendly business environment among other reasons. Between 2014 and November 2021, over 2,700 foreign companies and their subsidiaries shut shop in India. States like Tamil Nadu, viewed as the Detroit of India, are no longer on the same level of growth.

The key to manufacturing growth rests on land — cost and transfer mechanisms; power — availability and cost; water — for industrial purposes at the assured level of minimum 10%; logistics and transport facilitation to get quick and easy access to the markets.

Land costs have been touching unaffordable levels for the industry — whether it is allotment by the government or acquisition privately. The average cost of land per hectare in industrial estates ranges from Rs 10-50 crore. Several States offer land on a platter as a major incentive, and this has also proved a competitive advantage for engaging foreign firms that bring with them new technologies and markets. Down the line, the sufferers are the micro and small enterprises that actually front-end the supply chains of the medium and large firms.

Making available land on lease with alienable rights in favour of the financial institutions would have accelerated the growth of manufacturing micro and small enterprises. Since many in the past migrated from the committed manufacturing sector to other sectors, state-level infrastructure investment companies hesitate to roll out such a model. The solution lies in MSEs in manufacturing aggregating into clusters or industrial parks with collective ownership and appropriate legal mandates to acquire guaranteed lease-hold rights alienable in favour of the lenders.

Between 2014 and November 2021, over 2,700 foreign companies and their subsidiaries shut shop in India. Tamil Nadu, viewed as the Detroit of India, is no longer on the same level of growth

Externalities defined as third-party (or spill-over) effects arising from the production and/or consumption of goods and services for which no appropriate compensation is paid play a vital role. These externalities range from land acquisition to price fixation to market penetration. Externalities can cause market failure if the price mechanism does not consider the full social costs and social benefits of production and consumption. The cushion provided through the compulsive CSR funding of 2% of the revenue of every corporate hardly meets the requirements. This is not considered a voluntary responsibility that would enhance their comparative advantage.

Although electricity supply and distribution have improved over the years, there is still an annual power gap of more than 10%, and we have the lowest per capita power consumption in the world. Power-intensive industries like rubber, metals and electronics, complain of low quality of power supply and high costs that make them highly uncompetitive globally.

Unemployment and unmatched wages seem to elbow out the manufacturing sector. Attraction of talent, retention strategies, and diversification of talent across the sizes in the manufacturing sector are challenges that seem to defy the strategies of Skill India, scaling up the capacities of technical education institutions as a part of the effort, starting incubation centres in technical and management education institutions.

A survey of placement committees across the top domestic educational institutes pointed out to poor job offerings, lack of glamour quotient and awareness concerning the potential of manufacturing jobs as reasons behind students taking little interest in manufacturing companies. Numerically speaking, universities and technical institutions have increased. New National Education Policy has been put in place. Yet, civil, mechanical, and electrical engineers are in short supply by around 50%. Research institutions are still not preferred goalposts for many science graduates.

The maximum possible growth for the manufacturing sector under ‘Make in India’ can only be realised if the country strikes a balance between export-led and domestic-demand-led growth, said credit rating agency Crisil (November, 2020). India has a vast domestic market and the demographics indicate a growing middle class on the threshold of 400 million. Poverty levels are also shrinking. The rise of rural demand seen recently and increasing preferences for branded and packaged products in those areas are good portends for sustained manufacturing growth.

The rising middle class has two tiers —  upper middle class and lower middle class. Both these tiers have moved to the digital map of India catching up with new products and online markets. Cost of marketing has been moving to affordable zones into dependable logistics, fast and prompt deliveries through e-marketing. Is this not the right time for manufacturing to meet the domestic demand at a global scale rather than eyeing the global markets at domestic prices?

As Chinese manufacturing is looking southwards, this is the time for India to look at low-end export markets like Thailand, Indonesia, and countries that are willing to trade in rupee rather than in dollar.
The Reserve Bank of India by opening the gateway for rupee trade de-bonded the nation from the US dollar. Italy, Middle East, and Russia entered the rupee trade. It may take a long time for the rupee to pare with the dollar and correct the trade imbalance. This could give a boost to manufacturing but seem to be taking an unduly long time even to overtake economies like Vietnam and Bangladesh.

The 2021 Budget programme for infrastructure at $5 trillion in the next five years under public-private partnership through PM Gati Shakti and the recently released National Logistics Policy would take at least another 3-5 years to show results. 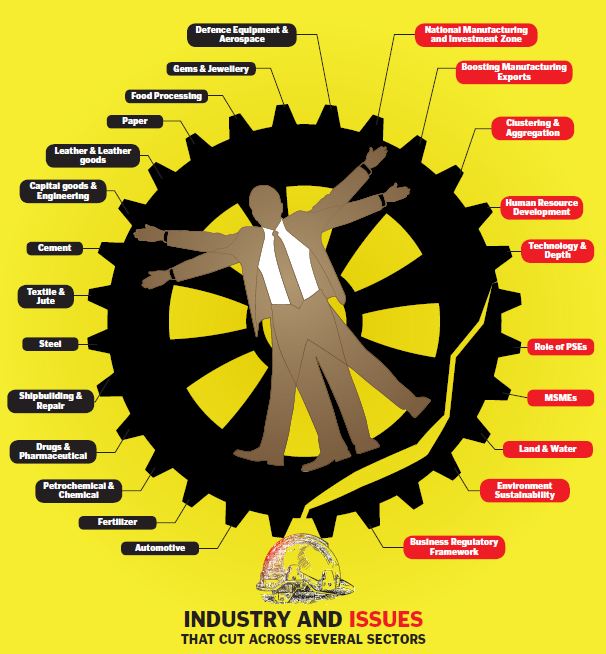 While the direct tax reforms, particularly the Income Tax Act, showed significant improvement, GST still has gaps notwithstanding the phenomenal rise in collection. Fuel is yet to enter the list of GST. Over Rs 58,521 crore in taxes is the reported loss due to illicit trade in FMCG, mobile phones, tobacco, and oil industry, according to the latest study by FICCI. The highly regulated industries —  tobacco and alcohol —  account for 49% of their overall tax loss. The report also says that 7.94 lakh jobs were lost due to illicit trade in FMCG.

Then there is the issue of certification and consistency in the quality of goods produced. Corporates around the world still prefer ISO and BSI certification for the goods they import. The CE and FDA certifications in India are yet to meet some of the basic inspection standards. Aligning with several global voluntary initiatives like Worldwide Responsible Apparel Production (WRAP) certification, energy management sustainability, green buildings/products, eco-friendly chemicals, and Social Accountability (SA 8000) is important.

MSMEs are spread in every sphere of manufacturing activity as they frontend the supply chains of medium and large firms. Inefficiencies in production processes, quality and buttressed certifications, low productivity, poor access to debt and equity, and lags in compliance with regulations of almost 7,000 products manufactured by them have a cascading effect on the growth of the manufacturing sector at least to the extent of 30%. Several committees both at the Union government and the RBI pointed out the much-required corrections.

The National Business Facilitation Grid with a regulatory governance catalogue and ordaining disclosures in accordance with the principles outlined in the ‘National Voluntary Guidelines on Social, Environmental, and Economic Responsibilities on Business’ is the strategic intervention programmed to ensure manufacturing growth with environmental sustainability and Intellectual Property Right protection.

However, Indian industries are probably coming under great stress mainly due to domestic weaknesses rather than global causes. There is large-scale discontent among the States over the Union government ignoring the law of proportionality in the distribution of resources through various schemes.

At the moment, there appears to be more substance than noise on this issue, measured in terms of the withdrawal of a few schemes from the public dispensation to a private regime – food distribution, for example, taking exception to the States’ independence in the liberal distribution of resources to the poor, energy pricing and energy distribution.

The overall climate for manufacturing growth depends on eliminating sovereign risks, enhancing investors’ confidence and cutting costs of regulation. The $5 trillion goal by 2025 is possible only when manufacturing improves its share at a sustainable 25% and agriculture at 12-15%. But for that, inflation must remain under control. The Boston Consulting Group estimates India’s average annual consumption to grow at 10% in the next decade. If the PMI also crosses 56 from the current level of 53 correspondingly, Hanuman may give new life to the manufacturing sector by 2027.

(The author is an Economist and Risk Management Specialist. Views are personal)

Veganism on the rise among health-conscious in Japan

Regulator exempts Musicow from punishment due to improved investors’ protection