Afghanistan remains a simmering cauldron of jihadist terrorist groups, various actors seeking to counter them, and conflict and cooperation among the groups themselves. 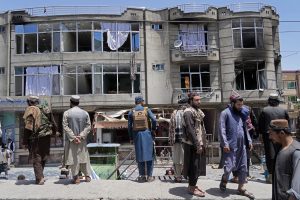 Taliban fighters stand guard at the site of an explosion in front of a Sikh temple in Kabul, Afghanistan, Saturday, June 18, 2022.

In October 2021, the U.S. undersecretary of defense for policy, Dr. Colin Kahl, testified before the U.S. Congress on the status of security in Afghanistan. When asked about the potential resurgence of international terrorism emanating from the country, Kahl responded that the U.S. intelligence community assessed both al-Qaida and the Islamic State’s “Khorasan” branch (known as ISK) “have the intent to conduct external operations, including against the United States, but neither, currently has the capability to do so.” Kahl went on to state that ISK could potentially develop such a capability within 6 to 12 months, while al-Qaida could take a year or two to do so.

We are now within the window of Kahl’s assessment for these two groups to have potentially reconstituted their capabilities to threaten Afghanistan’s neighbors and beyond. But have they done so?

A year after Kahl delivered this assessment, it is worth taking stock of notable terrorist groups in Afghanistan and what various actors are doing to counter them. The rest of this article examines the recent evolution and current status of four terrorist groups in Afghanistan, namely al-Qaida, ISK, Tehrik-e-Taliban Pakistan (TTP), and the East Turkestan Islamic Movement (ETIM, also known as the Turkestan Islamic Party). After discussing each group in turn, the article will describe what – if anything – the Taliban have done about them, as well as what we might expect in the year ahead.

Al-Qaida’s presence in Afghanistan consists of a cadre of its “core” leadership as well as members of its regional affiliate, known as al-Qaida in the Indian Subcontinent (AQIS). At the time of the Taliban’s takeover of Afghanistan, al-Qaida’s core leadership released a statement that heartily congratulated the group on its accomplishment. It also used the opportunity to energize its global affiliates and to reinvigorate drives for new recruits and funding.

Al-Qaida’s leadership had been recovering from a period of losses, and Ayman al-Zawahiri, Osama bin Laden’s successor as the head of the organization, released a video in September 2021 that put to rest persistent rumors of his death. In early 2022, al-Qaida was assessed to have several dozen senior leaders in the country, some of whom were reported to be living in Kabul’s former diplomatic quarter. Zawahiri was believed to be in eastern Afghanistan, along with several other core leaders.

By May 2022, the U.N.’s monitoring team concluded that “the operational activities of al-Qaida in Afghanistan have been limited to advice and support to the Taliban… al-Qaida appears free to pursue its objectives, short of international attacks or other high-profile activity that could embarrass the Taliban or harm their interests.” It also assessed that al-Qaida would likely remain focused on internal reorganization to better pursue its global jihadist aspirations. The U.S. government largely concurred with that assessment.

By July, however, al-Qaida had re-energized its media wing and Zawahiri had been issuing regular audio and video messages exhorting his followers to “besiege America with terror.” These activities seemed to indicate a newfound level of comfort for the al-Qaida leader within Taliban-run Afghanistan.

Willie Green on Herb Jones: “His defensive instincts are incredible”

Gonzaga’s brutal slate continues with No. 6 Baylor up next