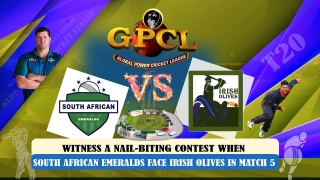 The match no. 5 sees South African Emeralds locking horns with Irish Olives. The Irish won the toss and opted to bat first. Olives were on fire in the Powerplay thanks to Mackay, who scored 33 out of the total 35 in the first 3 overs.

Durness Mackay was firing all over the ground and as a result Irish Olives finished the Powerplay on a strong note with Mackay scoring around 90% of the runs.

Meanwhile, the South African’s were looking for a wicket and they were succefully able to break the opening partnership. After a poor bowling performance in the PowerPlay South African Emeralds got their first breakthrough thanks to Gregory, who sent Adey back to pavilion for just 15 runs. Thus, after 8 overs Irish Olives stands at 71 for 1.

The scoring rate took a dig after Mackay’s departure (scoring 61 of 35 balls). With the help of Grobbelaar, South African’s were able to comeback in the contest as took 2 quick wickets. But was unable to complete his hat-trick.

After a strong start, Irish Olives were restricted to Just 158-6

While for the Emeralds Gregory, Cameron, and Robert, each took a wicket each and Grobbelaar ended with 2 in his bag.