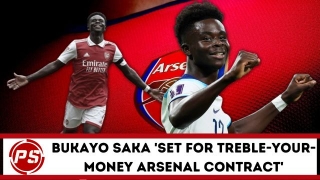 Bukayo Saka’s pay at Premier League leaders Arsenal is reportedly about to increase as they get ready to sign the attacker to a new, long-term deal. Since making his debut at the Emirates Stadium in November 2018, the 21-year-old has established himself as a standout player and has improved under head coach Mikel Arteta.

In 151 appearances with the Gunners in all competitions, Saka has scored 28 goals and contributed 35 assists, including five goals and six assists in 20 games this season.

The Hale End academy graduate’s current contract is set to end in June 2024, but recent rumours suggest that negotiations for a new contract are already under way between the player and the club.

This season, Arteta told reporters that he is “quite optimistic” Saka will devote his future to the team.

“I’m very confident that we as a club, Bukayo, his family, his agent, everybody, we are very much aligned with what we want to achieve.”

“Now it’s about putting it on a piece of paper. I would like that to get done because I don’t want the player or anybody to be distracted while we are in the middle of the season, but those things take time.”

In addition, Saka stated that he “shares the confidence” of his manager.

“Yes, I share his confidence. He knows when to speak to me, it’s not too much but it’s not too little and the different bits of advice he gives me are special and it makes such a difference.”

In order to stave off any interest from prominent European clubs, Arsenal is eager to lock Saka down to a new contract as soon as possible, according to The Mirror.

Saka is now paid about £70,000 per week, according to the report, but under his new contract, his pay may triple to over £200,000 per week, making him one of the highest-paid players at the team.

As England’s representative at the World Cup, Saka, who was voted the country’s Male Player of the Year for 2022, has already made an impression in Qatar after scoring twice in Monday’s 6-2 triumph over Iran.

The forward hopes to keep his spot in the starting lineup for Friday’s Group B match against USA after accumulating six goals and five assists in 21 outings for the Three Lions.

Saka is not the only Arsenal player who might be eligible for a contract extension; fellow forward Gabriel Martinelli, age 21, also expressed interest in signing a new contract with the club.

“I am very happy at Arsenal. I’ve said it many times. This is my club. I love to be here, I love the city, I love the club,”

“I love everything about Arsenal so I want to stay. I just need to get a pen. I want to score, score in the next game and help my team do well.”

Martinelli’s current contract will expire in the summer of 2024, similar to Saka’s, but the Gunners may be able to exercise a two-year extension option.

As Russia launches more nuclear ice-breakers, how global warming could lead to a new hotspot in the Arctic — RT World News