Anjaiah has won State awards and is providing employment to about 10 persons through his Sri Anjaneyam Electronics Company in Kishanraopet.

Jagtial: Injapuri Anjaiah is a busy man these days. This Class 5 dropout from Kishanraopet of Velgatur mandal in Jagtial is setting an example on where determination can take a person.

The second of three children of Posavva and Durgaiah, Anjaiah had to drop out from school in Class 5 due to a debilitating illness. He even lost his voice briefly. By the time he regained his voice, financial issues prevented him from returning to school, and he began going with his father to work on agricultural fields.

From there, Anjaiah, now aged 36, earns quite a respectable amount every month, has won State awards and is providing employment to about 10 persons through his Sri Anjaneyam Electronics Company in Kishanraopet. 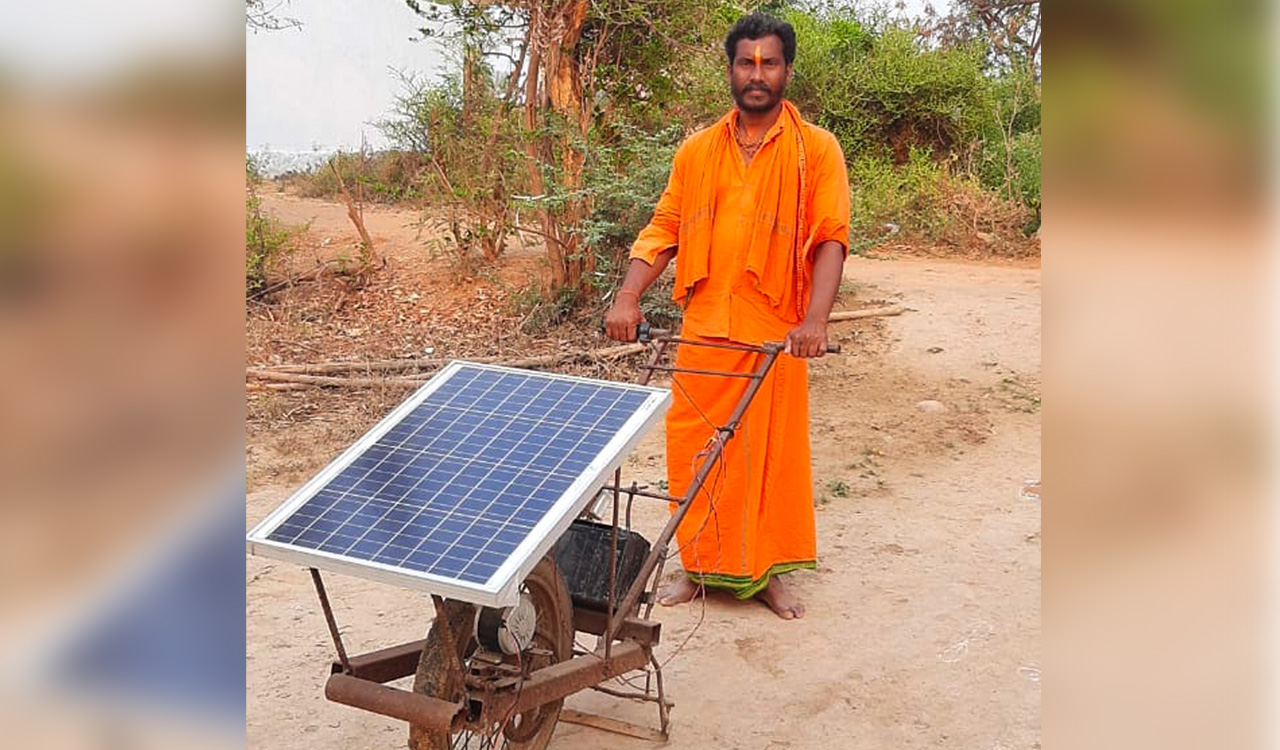 Rural innovator Anjaiah with a solar weeder and sprayer

It all started with his habit of collecting old gadgets and learning how they worked. And the spree of innovations started during a brief stint as a supervisor at a granite unit in Karimnagar. To help the unit owner solve the problem of water tank overflowing, he devised a water tank overflow alarm in 2012.

After that it was his wild animal alarm that brought him fame. Originally made in 2019 to help farmers by scaring off wild pigs from damaging their crops, the gadget was selected for an NIRD exhibition held in Rajendranagar. He then got a number of orders from different parts of the State as well as from Andhra Pradesh. He went on to devise two variants for the gadget, one that ran on solar power, and the other, a conventional electricity-powered one.

The gadget was interesting with its ingenuity, with a loudspeaker giving out sounds of different animals including that of a tiger, lion, elephant and dog so as to scare the wild pigs. Each machine could cover three to four acres of land.

Anjaiah also developed a Solar Electric Weeder and Sprayer, which won a cash award of Rs 2 lakh from the Telangana State Innovation Cell in April this year.

Anjaiah says he is now improvising the weeder based on advice from farmers. It was being made used for farmers to remove weeds in cotton and other fields, he adds.