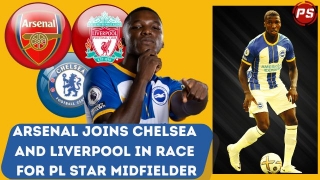 According to reports, Arsenal have joined Chelsea and Liverpool in the competition to sign Moises Caicedo, the Brighton & Hove Albion midfielder.

Since making his Premier League debut in April of last year, the 21-year-old has established himself as a standout player at the Amex Stadium. Thus, other elite English teams have taken notice of his performances.

According to a report from earlier this month, Caicedo has expressed his desire to join Liverpool to pals. As Jurgen Klopp’s team prioritising the signing of a new center-midfielder.

Chelsea are also rumoured to have increased its offer for the Ecuadorian international. The Blues have roughly put forward £65 million after Brighton turned down an initial offer of £55 million.

In recent months, Caicedo has also reportedly drawn interest from Manchester United and Newcastle United, but Arsenal are the newest team to be rumoured to have entered the fray.

Journalist Fabrizio Romano claims that despite Caicedo’s recent change of representation, Arsenal, Chelsea, and Liverpool are all “fully apprised” of the midfielder’s predicament.

The young player is currently handled by Futbol Division, the same agency that represents Ecuador colleague Piero Hincapie, and Romano adds that his future at Brighton is “one to monitor” in the final week of the January transfer window.

Caicedo, who has played 31 times for Brighton across all leagues, is under contract until June 2025, although manager Roberto De Zerbi recently wouldn’t rule out the midfielder leaving the club.

“The mentality of Moises is amazing. He doesn’t need something more. To know that big teams in Europe want him isn’t a problem for him.”

“I think he can become one of the best midfielders in Europe. For me he is now, but in the next two years for sure, because he’s technical but he, strong, physical. He’s complete.”

“But the question about whether we sell our big players is not for me, it’s for our owner. The problem is not to sell. The problem is to buy the new players with the same level or the same potential as the ones you sell. For the moment I think the club is working well in terms of scouting for new players.”

In the midst of rumours over his future, Caicedo recently emphasised that he is “focused exclusively on Brighton,” telling the club’s official website:

“I am focussed on Brighton. I am here, I’m playing every day. Things from outside don’t trouble me, nor does it take that focus away because I’m focussed only on here.”

“I handle [the speculation] well. You hear rumours here and there, but I only try to be focused on the club where I am now, the club which opened the doors for me to be playing every week.”

Mikel Arteta, the manager of Arsenal, is reportedly looking to add a new center-midfielder between the next two transfer windows. Declan Rice of West Ham United and Caicedo are two of his high-profile targets.

Summary of domestic news in North Korea this week