Heavy snow continued Wednesday across much of Japan as the country grapples with the most severe cold snap of the season so far, with trains and vehicles stranded and at least one person left dead as winter storms caused difficulties.

Record cold temperatures were seen in parts of Japan, with snow falling on the Sea of Japan coast stretching from the country’s north to west. Amid concerns of further snowfall, including in low-lying areas on the Pacific coast, the weather agency is calling for vigilance against blizzards, rough seas and icy roads.

The weather has brought widespread disruption. Thousands of people using local train services in Kyoto and Shiga prefectures in western Japan were forced to stay overnight in carriages or stations, while vehicles on major roads across the country were left stranded and hundreds of flights canceled. 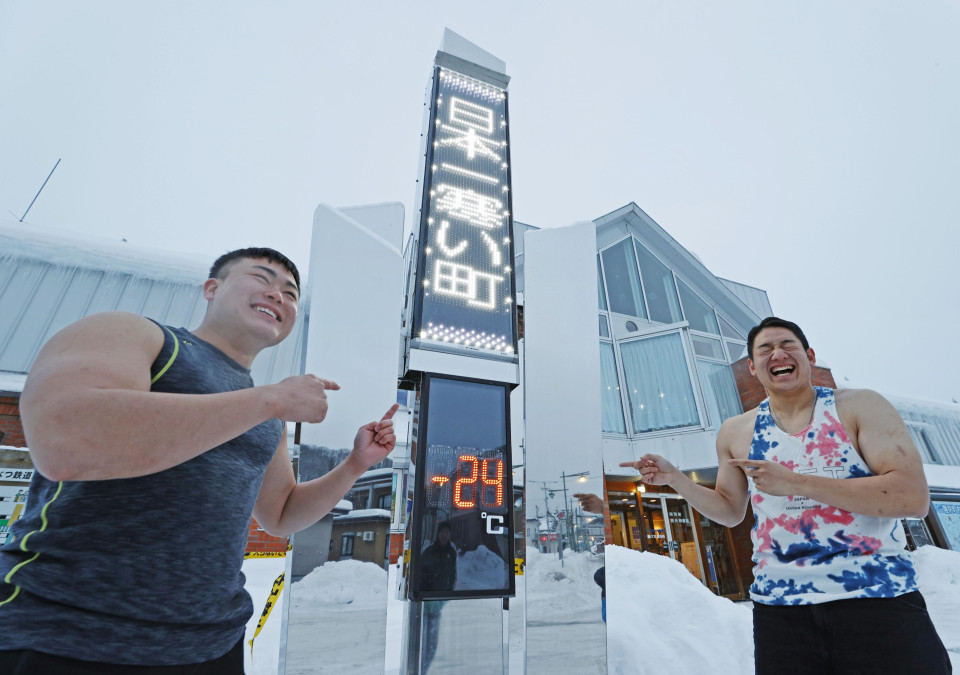 An outdoor thermometer shows a temperature of minus 24 C in the Hokkaido town of Rikubetsu in northern Japan on Jan. 25, 2023. (Kyodo)

One person has died in southwest Japan’s Oita Prefecture in an accident while removing a fallen tree, while two in Okayama Prefecture were found without vital signs, Deputy Chief Cabinet Secretary Yoshihiko Isozaki said Wednesday at a news conference in Tokyo.

The deaths of two more people in Niigata Prefecture north of the capital are also being investigated in connection with the cold weather, he said.

Snowfall in central and western Japan since about 3:50 a.m. on Wednesday has also led to closures at multiple locations in both directions on the Shin-Meishin Expressway between Mie and Shiga prefectures, its operator said. 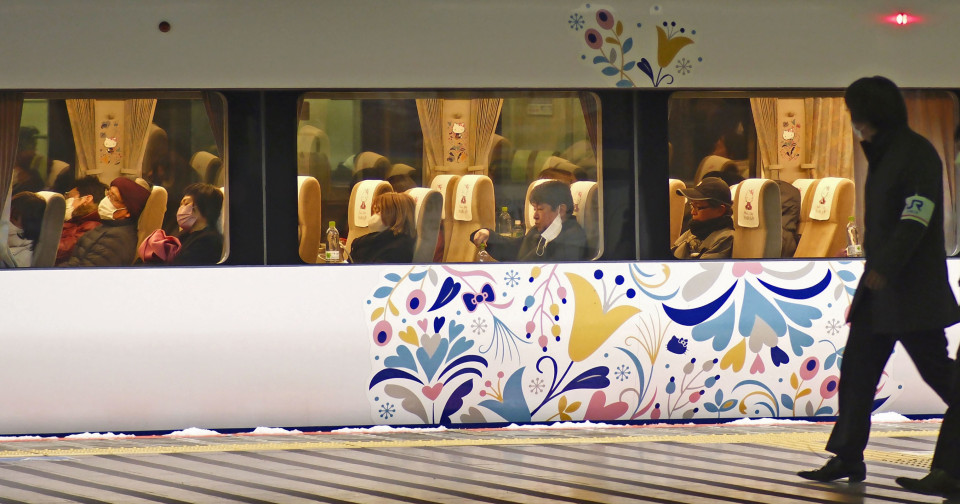 Photo taken on the morning of Jan. 25, 2023, shows a train stranded at JR Kyoto Station in western Japan due to heavy snow, forcing many passengers to remain overnight inside its cars. (Kyodo) ==Kyodo

A number of vehicles remain stranded in the closed-off sections, and their presence is impeding snow-removal equipment. Consequently, expressway employees must remove the snow and direct vehicles to the nearest exits.

“I was stuck since last night and am going to the bathroom for the first time in 14 hours,” said a 48-year-old male driver, adding that he had walked to a rest stop after being caught in a traffic jam while traveling from Nagoya to Nara Prefecture.

On local railways, passengers were stranded on several trains on the Biwako Line and Kyoto Line overnight from Tuesday due to snow and strong winds, operator West Japan Railway said. The company reported delays and cancellations on around 20 of its lines, including express services through Wednesday morning. 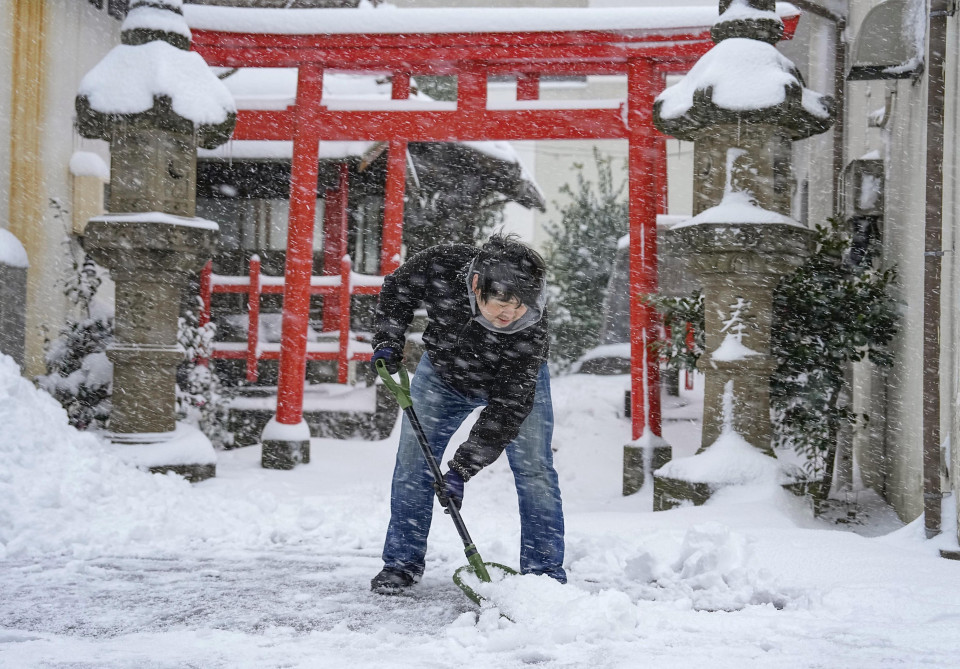 The Kyoto city government said that around 1,700 people at Yamashina Station and 2,300 at Kyoto Station were left stranded.

A total of 15 trains were stopped for hours on the tracks, of which two asked passengers to walk to the nearest train station, according to JR West. One train stopped past 7 p.m. Tuesday, with travelers alighting from around 11 p.m. through 5:30 a.m. Wednesday.

Some passengers reported feeling unwell, with 16 later taken away by ambulance.

Masahiro Nishikawa, a 48-year-old who spent the night in an underground passage at Kyoto Station, said, “We only got one thermal sheet each from staff. I couldn’t sleep because it was so cold.” 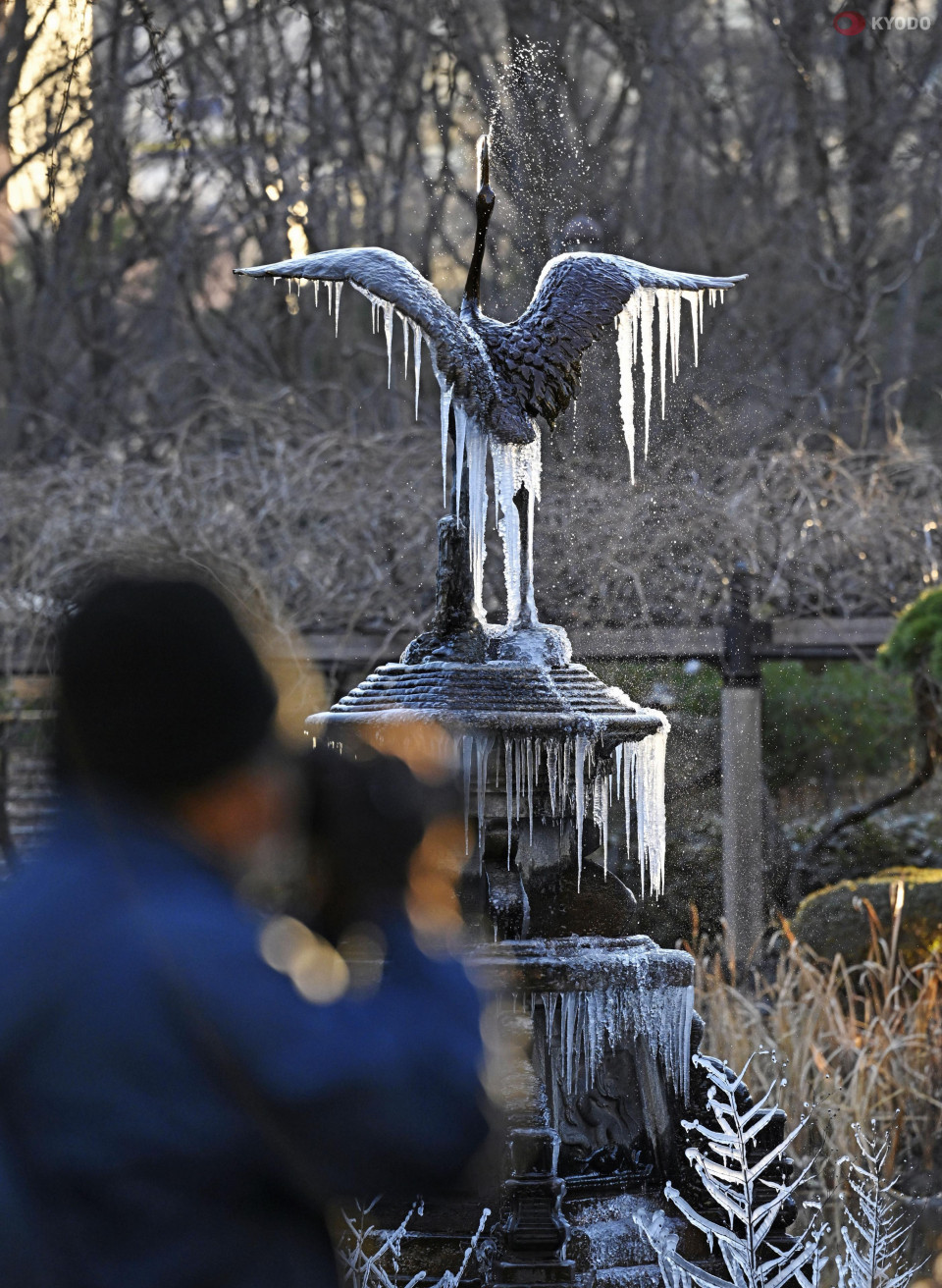 Photo taken on the morning of Jan. 25, 2023, shows a fountain at Tokyo’s Hibiya Park with its water frozen into icicles due to a cold snap that hit the capital. (Kyodo) ==Kyodo

A snow melting system had not been activated due to an underestimation of snowfall, leading to a malfunction on the railroad switch, said Takahiro Mitsuno, chief director of the Kansai Regional Head Office of JR West.

In southwestern Japan’s Nagasaki Prefecture, around 100 vehicles were unable to move overnight and into Wednesday on an around 9-kilometer stretch of a national road, the prefectural government said.

Elsewhere, in central Japan’s Fukui Prefecture, about 20 vehicles were stuck from late Tuesday on a national road, with traffic brought to a halt on a 14-kilometer stretch until early Wednesday.

Among the other effects on transportation, Japan Airlines and All Nippon Airways said more than 300 flights scheduled for Wednesday have been canceled.

High-speed train services have also been disrupted, with East Japan Railway suspending bullet train runs between Fukushima and Shinjo on the Yamagata Shinkansen Line in the northeastern Tohoku region throughout the day.

Sections of bullet trains services on the Sanyo Shinkansen and Tokaido Shinkansen lines were running at reduced speed, according to their operators, while delays were also experienced on the Tohoku and Akita Shinkansen lines.

Central Tokyo experienced subzero temperatures on Tuesday night and its first snow of the year, though just a small amount fell and did not settle on the ground.

The heavy snowfall also affected store operations across the country, with some delaying opening hours as employees struggled to come in due to disruptions to transportation facilities.

The Japan Meteorological Agency warns that the strong winter weather cell is expected to hold through Thursday.

Mountainous and coastal regions on the Sea of Japan side of the Chugoku region in the country’s west saw particularly large snowfalls. Among them, Maniwa in Okayama Prefecture observed 93 centimeters of snow in the 24 hours through 8 a.m. Wednesday, its most on record.

Atmospheric conditions in Japan’s east and west are forecast to continue to be very unstable, the agency said. Powerful winds blowing across the country are also expected to cause seas to be rough.

Much of Japan to see heavy snow from Jan. 24 as winter storm arrives

Vanderpump Rules Doubles Down on Tom Schwartz Drama in Season 10