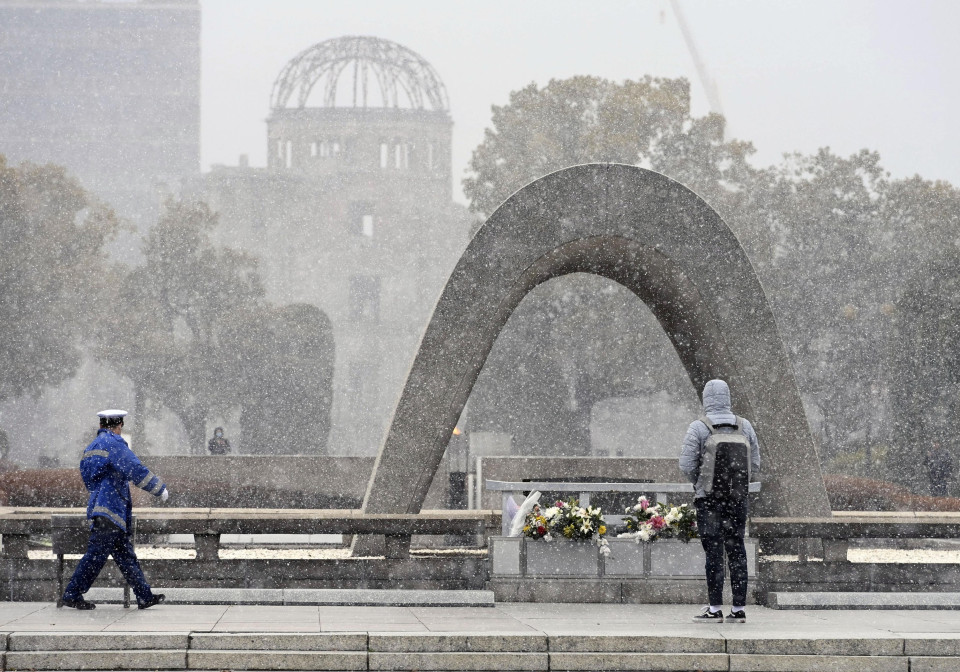 People visit the Peace Memorial Park in Hiroshima, western Japan, amid snow on Jan. 24, 2023. The Atomic Bomb Dome is seen in the background. (Kyodo) ==Kyodo

TOKYO – Heavy snow continued Wednesday across much of Japan as the country grapples with the most severe cold snap of the season so far, with trains and vehicles stranded as winter storms caused difficulties.

Transport was disrupted, with passengers stranded on several trains on the Biwako Line and Kyoto Line Tuesday for several hours due to snow and strong winds, operator West Japan Railway said.

Cargo ship with 22 aboard sinks off southwestern Japan, 4 rescued

The Japan Coast Guard is searching for the remaining 18 crew members of the Hong Kong-registered vessel, hoping they may be adrift on lifeboats.

“Doomsday Clock” ticks closer to catastrophe amid war in Ukraine

WASHINGTON – A group of atomic scientists on Tuesday moved the hands of the “Doomsday Clock” to 90 seconds to midnight — the closest ever for the symbolic estimate of human proximity to self-caused annihilation — citing growing dangers from the ongoing war waged by Russia in Ukraine.

The clock, created in 1947 and maintained by the Bulletin of the Atomic Scientists, was at a position of 100 seconds to midnight for the third year until 2022.

SYDNEY – Newly elected Labour Party leader Chris Hipkins was sworn in as the 41st prime minister of New Zealand on Wednesday, less than a week after Jacinda Ardern announced her shock resignation from the role.

Hipkins, 44, was the sole candidate to replace Ardern as leader of the ruling party, and therefore prime minister, in swift party deliberations that followed Ardern’s announcement on Jan. 19 that she would step down as the country’s leader and exit parliament in April.

Cargo ship with 22 aboard capsizes off southwestern Japan

KITAKYUSHU, Japan – A cargo ship with 22 people aboard has capsized off Nagasaki Prefecture in southwestern Japan, according to the coast guard, with the vessel issuing a distress call late Tuesday.

Efforts to rescue the Hong Kong-registered vessel’s crew, including Chinese and Myanmar nationals, are ongoing.

WASHINGTON – Foreign ministers from the Group of Seven major democratic economies and their partners reaffirmed their commitment Tuesday to supporting Ukraine’s energy infrastructure, the U.S. and Japanese governments said.

The participants agreed to continue their close coordination to deliver equipment and humanitarian support this winter and procure essential infrastructure during the online meeting co-chaired by U.S. Secretary of State Antony Blinken and Japanese Foreign Minister Yoshimasa Hayashi.

TOKYO – Japan’s primary deficit will triple from its earlier projection to 1.5 trillion yen ($11.5 billion) in fiscal 2025, the target year when the government aims to turn a surplus, due to a substantial increase in defense spending, government projections showed Tuesday.

The revised projections are based on the assumption that Japan’s economy will grow 2 percent in real terms, with the balance possibly deteriorating further if economic growth slows.

The move marked the second time the department has sued Google, following a case in October 2020 when the federal government alleged the company unlawfully monopolized online search services.

Chinese invasion of Taiwan may not be imminent: Japan envoy to U.S.

WASHINGTON – Japan’s ambassador to the United States said Monday the possibility of China invading Taiwan is “not necessarily imminent” but it is important to constantly send a clear message to Beijing that the two allies have a “strong interest” in peace and stability in the self-ruled island.

“We were able to confirm that the positions of the two countries are in agreement at a very high level,” Koji Tomita said in an interview, touching on Prime Minister Fumio Kishida’s first visit earlier this month to Washington since taking office in October 2021 for talks with U.S. President Joe Biden.

TOKYO – The preservation of plant seeds as a genetic resource is becoming more and more important at a time when many crops are threatened by extinction or lower productive output due to climate change and the destruction of ecosystems through overdevelopment.

The shifting of ideal growing zones due to warming across the globe makes the creation of seed banks a cause for international concern, with changing growing conditions driving a need for what is, in effect, an ecological database.

In Assam, police crackdown on child marriage leaves a trail of crying women and broken families