Modi govt must not politicise Mission Gaganyaan which is slated for launch in the election year for electoral gains.

The report card demanded from the incumbent BJP government would be for the last 10 years. On the BJP’s part, it may show its efforts in the outer space arena as India’s success story. However, outer space as a strategic domain has been kept outside the purview of electoral-cum-political debates.

There has been a general consensus largely among the political class that, unlike other issues of national importance, outer space shouldn’t be debated for making political potshots for trivial gains by any political party. Whatever the reasons behind treating the outer space domain differently as compared to other strategic issues like defence, security matters related to border skirmishes and India’s relations with its neighbours like China and Pakistan, it’s good that outer space has remained untouched by petty electoral politics and the blame game that is otherwise generally played between those in power and in opposition.

Against this backdrop, it would be a golden opportunity for the union government to present to the layman of this country what steps have been taken in the last decade to take the Indian space programme to the next level. In this regard, the year 2023 is going to be very critical. The reason being that preparations for one of the most important space missions announced till date by the Modi government ie, the ‘Gaganyaan Mission’— which is India’s first human spaceflight mission, will go in full swing. It is expected that the human spaceflight mission could be scheduled in 2024. The Indian space programme is looking for a big boost which can be achieved by a successful Chandrayaan-3 mission and an even bigger boost can be achieved if India’s manned space mission next year is conducted successfully.

The last couple of years which were marred by Covid-19 delayed Mission Gaganyaan, which was originally scheduled for 2022, which marked the 75th year of India’s independence. Before that, India’s lunar mission ie, the Chandrayaan-2 in September 2019 was also unsuccessful. Though the Indian Space Research Organization (ISRO) has been largely successful in most of its spacecraft missions, launch missions, re-entry missions, and launching student and foreign satellites too met with success. But a few space missions have become the first among equals. These missions get more limelight from the media and people look forward to their success.

Both the Modi government and the ISRO want to attain success in these marque missions which can stamp India’s authority as a space power. Although India has never been a part of any space race, which superpowers like the United States and the erstwhile Soviet union participated in throughout the Cold War, achieving success in sending missions to the Moon, other planets, solar missions and human space llight missions has historically been recognised as key markers of space prowess.

Cashing in on Success

Frankly, there is nothing wrong with achieving success in these key sectors as opposed to getting success in launching various weather satellites and communication satellites, which have very prominent scientific value. But the success of reaching the Moon, the Sun and extra-terrestrial bodies has always been a thing of awe for the masses in general.

To cite an example, people, in general, know more about astronauts like Neil Armstrong and Yuri Gagarin than many successful unmanned missions achieved by space agencies like NASA. In India too, people know more about Rakesh Sharma, the first Indian to participate in a successful human spaceflight mission in 1984, as opposed to any other space mission conducted by ISRO.

These examples show that of all the space missions that were conducted under the Modi government post-2014 and all those which are scheduled to take place before May 2024, the most prominent would be Mission Gaganyaan. A successful manned space mission adds glory to the space agency, the incumbent government and, most importantly, gives a reason to the masses to derive great joy from it.

In that light, if Mission Gaganyaan gets scheduled (as expected) for its un-crewed mission in early 2024, the fear is that outer space might become politicised in a big way for the first time in India’s history. If there is a big build-up to Mision Gaganyaan just before the general elections next year, the political class would naturally like to lap it up to take the credit, which rightfully belongs to ISRO, for their own electoral gains. The biggest drawback of this kind of politically charged environment is that it adds pressure on our scientists and space engineers. The ideal thing, in this case, would be to let ISRO do its job quietly so that when the Mission becomes successful, the success makes its own noise. 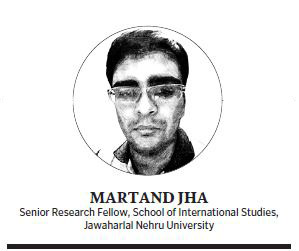